Folds are geologic structures created by plastic deformation of the Earth’s crust. To understand how folds are generated, take a piece of paper and hold it up with a hand on each end. Apply compressional forces (push the ends towards each other). You have just created a fold (bent rock layers). Depending on how your paper moved, you created one of the three main fold types (Figure 12.11).

A monocline is a simple fold structure that consists of a bend in otherwise horizontal rock layers. More commonly found are anticlines and synclines. An anticline fold is convex up and one in which the layered strata are inclined down and away from the center of the fold (if you drew a line across it, the anticline would resemble a capital letter A). A syncline is a concave upward fold in which the layered strata are inclined up (it resembles a smile). Parts of a fold include the axis (the hinge line), the axial plane, and limbs on either side of the axis (Figure 12.12). It is important to note that anticlines do not always represent mountains or high areas and synclines do not always represent basins or low areas. They are simply folded rock layers and do not necessarily indicate topographic high and low points (see Figure 12.13). As rocks undergo brittle deformation, they may produce cracks in the rocks. If no appreciable displacement has occurred along these cracks, they are called joints. If appreciable displacement does occur, they are referred to as faults. We will first examine dip-slip faults, in which the movement along the fault is either up or down. The two masses of rock that are cut by a fault are termed the fault blocks (Figure 12.21). The type of fault is determined by the direction that the fault blocks have moved.

When extensional forces are applied to the fault blocks, the hanging wall will move down, creating what is called a normal fault (an easy way to remember this is the phrase “It’s normal to fall down”). As this happens, the crust is stretched out and lengthened (Figure 12.23).

When compressional forces are applied to the fault blocks, the hanging wall will move up, creating a reverse fault. This causes the crust to shorten in the area (Figure 12.24). A special type of reverse fault is a thrust fault. It is a low angle reverse fault (with a dip angle of less than 45o), and has a much thinner hanging wall. 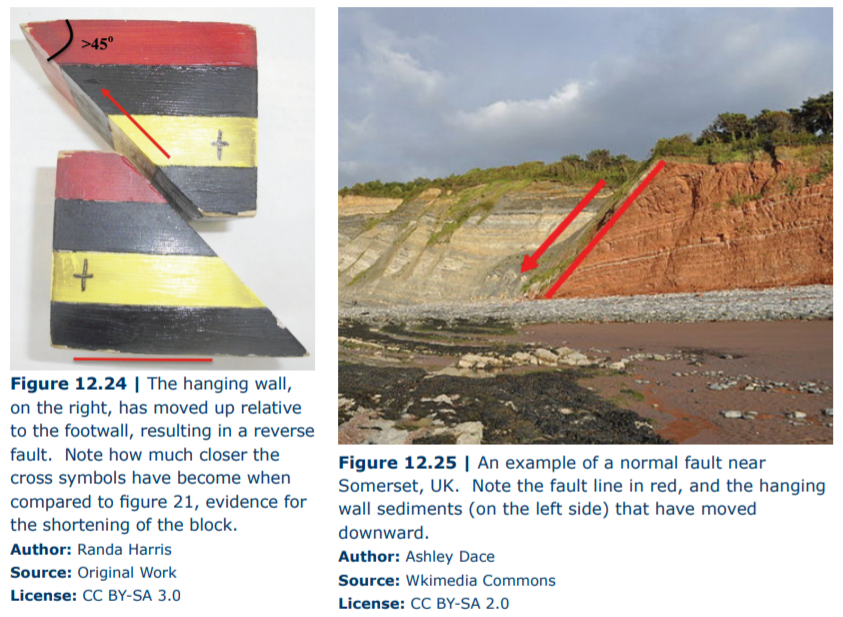 Tensional forces acting over a region can produce normal faults that result in landforms known as horst and grabens. In horst and grabens, the graben is the crustal block that downdrops, and is surrounded by two horsts, the relatively uplifted crustal blocks (Figure 12.26). This terrain is typical of the Basin and Range of the western United States. The previous faults we observed were dip-slip faults, where movement occurred parallel with the fault’s dip. In a strike-slip fault, horizontal motion occurs (in the direction of strike, hence the name), with blocks on opposite sides of a fault sliding past each other due to shear forces. The classic example of a strike-slip fault is the San Andreas Fault in California (Figure 12.27). These faults can be furthered classified as right-lateral or left-lateral. To determine this, an observer would stand along one side of the fault, looking across at the opposite fault block. If that fault block appears to have moved right, it is right-lateral; if it has moved left, it is left-lateral. Figure 12.28 provides all three fault types for your review.