During conversations regarding climate change there is a common myth that climate denialists bring up to try and debunk human-caused climate change. The myth is that winters are getting colder therefore the earth is not warming and climate change is not occurring. When applying FLICC this myth falls under the category of cherry picking and misrepresentation. Although one winter in one area (i.e the east coast of the United States or parts of Europe) may be colder than the previous year it does not detract from the fact that the global temperatures are steadily increasing. 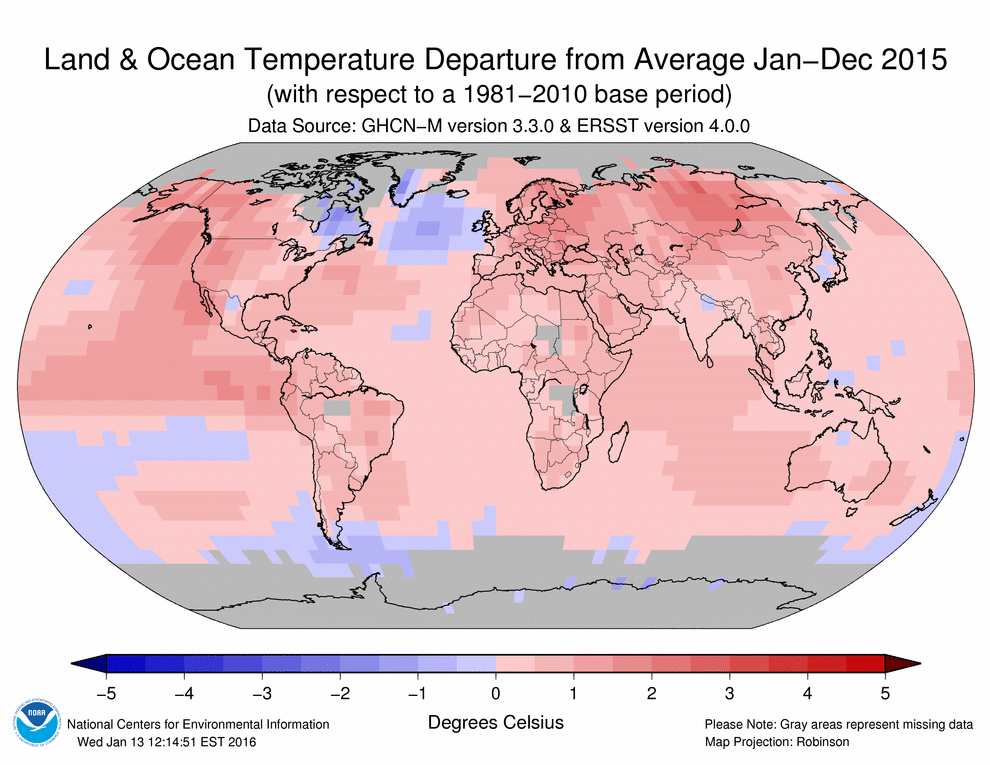 The above graphic represents the mean temperature increase in degrees Celsius with respect to the mean global temperature from 1981 to 2010. This graphic shows that although there are some areas that have seen a decrease in mean temperature, the majority of the globe has seen a much greater increase. This myth also confuses the definition of climate and weather. According to the National Oceanic and Atmospheric Administration (NOAA) climate is defined as the average of weather over a 30 year period for an area, while weather is a short term description for the temperature, humidity, rain percentages, etc. of a local region. For example, when discussing the winter season of New York that would be discussing the weather in that particular time while talking about the climate of New York would involve the average temperature of Fall, Winter, Spring, and Summer over a 30 year period. Therefore, using the temperature of one winter season to argue that climate change is not occurring is an erroneous and invalid argument.

The science behind why certain geographical areas are experiencing colder winters revolves around the Polar Jet Stream. The Polar Jet Stream is an area of strong wind located about 6 to 9 miles above the surface of the Earth in an area known as the tropopause, an area defined by the interaction of the troposphere and the stratosphere. In regard to latitude the Polar Jet Stream is located between 50ºN to 60ºN where cold air moving south from the Arctic interacts with warm air moving north from the United States, Europe, and other countries. The location of the jet stream is broad because the position changes throughout the year depending on the intensity between the cold air moving south and the warm air moving north. As the above graphic on the left shows the jet stream migrates southward during the winter and northward during the summer. This causes cold air that migrates from the Arctic to reach the eastern United States and results in cold winter seasons. The reason behind the colder winters is related to the position of the polar jet stream, most notable the position of the jet stream as it migrates south due to more intense temperature and pressure differences. Because of this it will be able to migrate more southward than its typical position, which will cause colder winters in newly exposed regions to the cold air front from the Arctic. The winters are getting colder therefore there is no global warming myth is a common misrepresentation that can be easily noticed and debunked with an understanding of the science behind colder winters.