The photo below show the location of Cache Creek in relation to Guinda, California from Google Earth. During this field trip, we observed modern sedimentary structures and environments along Cache Creek, and interpreted how they affected depositional and erosional processes. We used these observations to reconstruct channel flow variations from the past and how they are preserved in sedimentary structures. This was achieved by collecting sediment samples at five separate stations, representing the diversity of facies within the environment, how flow can vary, and how sediment size is affected by flow and vegetation.

Stops Along the Way:

The groves of trees and the roads that have not eroded away stayed relatively the same since the aerial photo was taken in 1993 (photo on the left below), but the bridge has been replaced in 2010. The channel geometry has changed a lot however. In the photo below on the right, south of the bridge, the river has migrated from the west side of the channel to the right side. North of the bridge, the modern channel immediately bends to the west and runs parallel to the bridge until it bends to the north in roughly eighty meters where a gravel bar formed creating two separate paths the flow can travel down the channel. Along Cache Creek south of the bridge, the first segment of the creek runs to the west and shows deposition from high flows from this past winter. We know the sediments are from this recent winter because foot traffic hasn’t disturbed bedforms and other features as seen in the photo on the left below. We observed imbricate bedding fabric along the creek indicating that the flow was fast enough to flip over large cobble sized rocks so they run parallel to flow direction. Deposited gravel bars, grain size variations, cross stratification (photo on the right below, pencil for scale), and the patterns of deposition in relationship to bushes, bedforms, and bars was also observed. 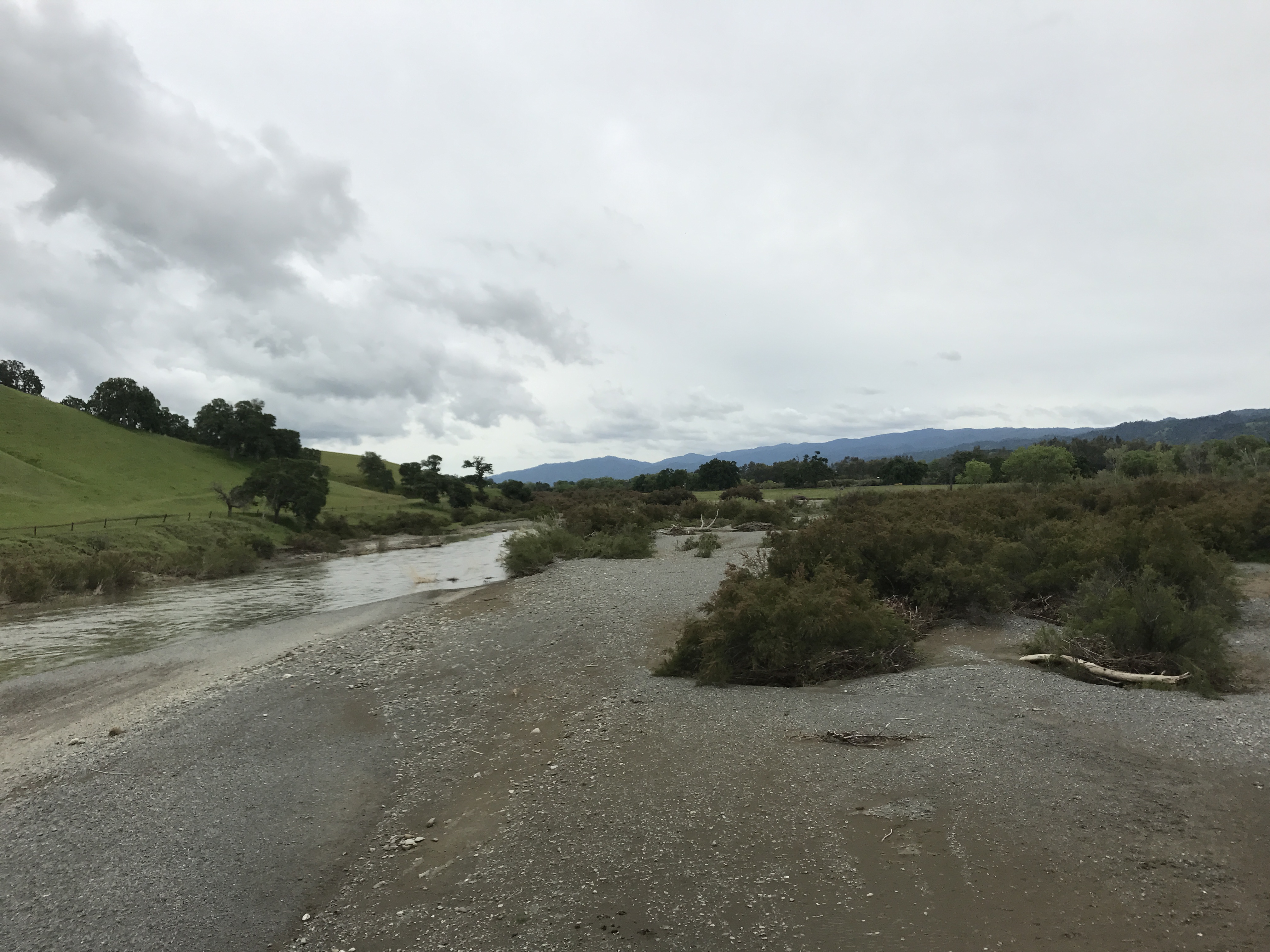 Further down the stream, we observed depositional environments of varying size and sorting of sediment is dependent on flow depth and velocity. We made observations at this location by analyzing five different stations and collected sediment samples. The stations were differentiated by grain size, where the largest grain sizes were at higher elevation while the smallest grains were found where ponding water was accumulating. Looking down stream, large cut banks on the right of the stream are observed were heavy erosion occurred when floodwaters cut into the bank is it accelerated around the sharp bend. Directly across the cut bank, a large gravel point bar formed from deposition is present.

Station 2: above the ponding water, fine mud to medium grained sand with lithic fragments mixed in. Moderately well sorted, possess similar composition, and cohesive due to minor saturation. There was a visible decrease in grain size and increase in sorting as we transitioned from station 1 to station 2. Station 3: Up slope from previous two stations and contains small dunes. Stepping and undulations is present along terrain, and the dunes are well sorted at crests and moderately sorted in between. The grains are very fine to cobble sized, with a decrease in grain size above the slope.

Below is the view seen while standing on top of the stepped terrain. There is a visible change in grain size as you walk up the slope.

Station 5: Past creek channel, where imbrication of cobbles was observed. Poorly sorted medium to coarse grained sand, to granules, to cobble sized lithic fragments and contains shell fragments. As you go up slope, there is an increase in grain size, indicating there was once a shallow channel with high velocity flows. Water flow at higher elevations of creek deposited large gravel sized material. As water levels receded, smaller sediment was deposited forming steps in the terrain that ranged from cobble to fine sand sized as velocity decreased the carrying capacity of the flow. Sediments from upstream were eroded and deposited downstream eventually ending at the ponding location.

Facies one contains mud sized grains found at stations one and four, representing where the channel flow at the shallow ponding location has decreased to almost zero velocity, creating minor oscillations and rippling along the bedding surface. It is directly below the eroded cutbank, indicating that the flow depth used to be much greater with fast flows from floodwaters.

Facies two contains fine to coarse sand with lithic fragments found at stations two and three, representing a moderately fast flow. The Reynolds number during this type of flow is high enough for saltating coarse sand sized sediment, but not fast enough to transport anything larger.

Facies three contains coarse sand to cobble sized sediment with incorporated shell fragments collected from station five. This poorly sorted, angular sediment and broken shell fragments indicates when the flow was at its greatest depth and velocity. The flow velocity and Reynolds number was high enough that mud sized all the way to cobble sized sediment was carried as a suspended load, and was deposited along the center of the channel as flow velocity decreased.

These depositional environments and fluvial features directly relate to how the flow depth and velocity changes through time depending on the amount of discharge contained within the channel.