Galaxies are the biggest groups of stars and can contain anywhere from a few million stars to many billions of stars (you can learn more here, from NASA). Every star that is visible in the night sky is part of the Milky Way Galaxy. To the naked eye the closest major galaxy, the Andromeda Galaxy, looks like only a dim, fuzzy spot but that fuzzy spot contains one trillion stars. 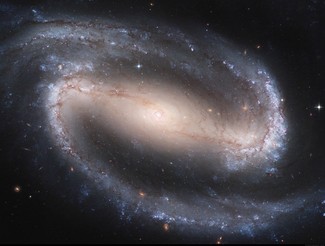 A YouTube element has been excluded from this version of the text. You can view it online here: http://pb.libretexts.org/pg/?p=48

On January 5, NASA released an image of the Andromeda galaxy, our closest galactic neighbor, captured by the NASA/ESA Hubble Space Telescope. The full image is made up of 411 Hubble images, takes you through a 100 million stars and travels over more than 40,000 light years. Well, a section of it anyway.