Although this may seem surprising, water beneath the ground is commonplace. Usually groundwater travels slowly and silently beneath the surface, but in some locations it bubbles to the surface at springs. The products of erosion and deposition by groundwater were described in the Erosion and Deposition chapter.

Groundwater is the largest reservoir of liquid fresh water on Earth and is found in aquifers, porous rock and sediment with water in between. Water is attracted to the soil particles and capillary action, which describes how water moves through a porous media, moves water from wet soil to dry areas.

The residence time of water in a groundwater aquifer can be from minutes to thousands of years. Groundwater is often called “fossil water” because it has remained in the ground for so long, often since the end of the ice ages.

Features of an Aquifer

To be a good aquifer, the rock in the aquifer must have good:

This animation shows porosity and permeability. The water droplets are found in the pores between the sediment grains, which is porosity. When the water can travel between ores, that’s permeability. http://www.nature.nps.gov/GEOLOGY/usgsnps/animate/POROS_3.MPG

To reach an aquifer, surface water infiltrates downward into the ground through tiny spaces or pores in the rock. The water travels down through the permeable rock until it reaches a layer that does not have pores; this rock is impermeable (Figure  below). This impermeable rock layer forms the base of the aquifer. The upper surface where the groundwater reaches is the water table. 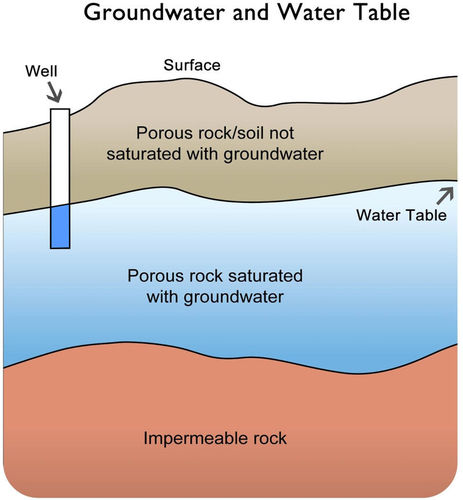 In wet regions, streams are fed by groundwater; the surface of the stream is the top of the water table (Figure  below). In dry regions, water seeps down from the stream into the aquifer. These streams are often dry much of the year. Water leaves a groundwater reservoir in streams or springs. People take water from aquifers, too. 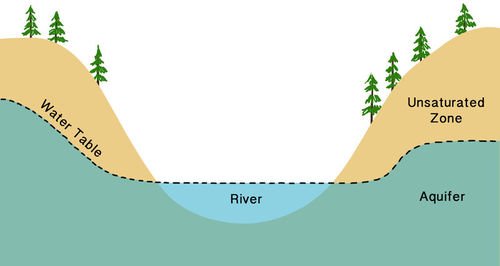 One of the most interesting, but extremely atypical types of aquifers is found in Florida. Although aquifers are very rarely underground rivers, in Florida water has dissolved the limestone so that streams travel underground and above ground (Figure  below). 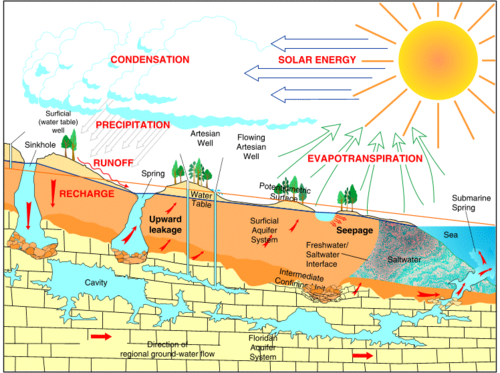 In Florida, groundwater is sometimes not underground.

Groundwater is an extremely important water source for people. Groundwater is a renewable resource and its use is sustainable when the water pumped from the aquifer is replenished. It is important for anyone who intends to dig a well to know how deep beneath the surface the water table is. Because groundwater involves interaction between the Earth and the water, the study of groundwater is called hydrogeology.

Some aquifers are overused; people pump out more water than is replaced. As the water is pumped out, the water table slowly falls, requiring wells to be dug deeper, which takes more money and energy. Wells may go completely dry if they are not deep enough to reach into the lowered water table.

The Ogallala Aquifer supplies about one-third of the irrigation water in the United States (Figure  below). The aquifer is found from 30 to 100 meters deep over about 440,000 square kilometers! The water in the aquifer is mostly from the last ice age.

The Ogallala Aquifer is widely used by people for municipal and agricultural needs. 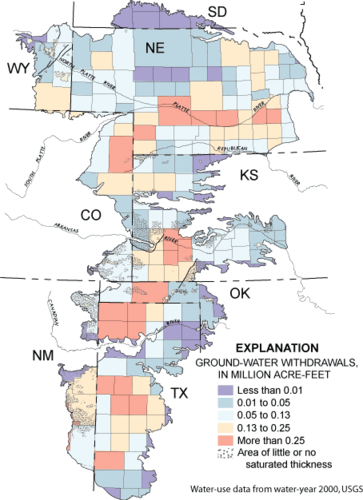 The Ogallala Aquifer is found beneath eight states and is heavily used.

About eight times more water is taken from the Ogallala Aquifer each year than is replenished. Much of the water is used for irrigation (Figure below). 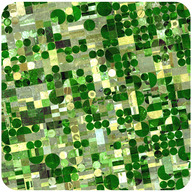 Farms in Kansas use central pivot irrigation, which is more efficient since water falls directly on the crops instead of being shot in the air. These fields are between 800 and 1600 meters (0.5 and 1 mile) in diameter.

Lowering the water table may cause the ground surface to sink. Subsidence may occur beneath houses and other structures (Figure  below).

The San Joaquin Valley of California is one of the world’s major agricultural areas. So much groundwater has been pumped that the land has subsided many tens of feet.

When coastal aquifers are overused, salt water from the ocean may enter the aquifer, contaminating the aquifer and making it less useful for drinking and irrigation. Salt water incursion is a problem in developed coastal regions, such as on Hawaii.

Groundwater meets the surface in a stream, as shown above, or a spring (Figure  below). A spring may be constant, or may only flow at certain times of year.

(a) Big Spring in Missouri lets out 12,000 liters of water per second. (b) Other springs are just tiny outlets like this one.

Towns in many locations depend on water from springs. Springs can be an extremely important source of water in locations where surface water is scarce (Figure  below). 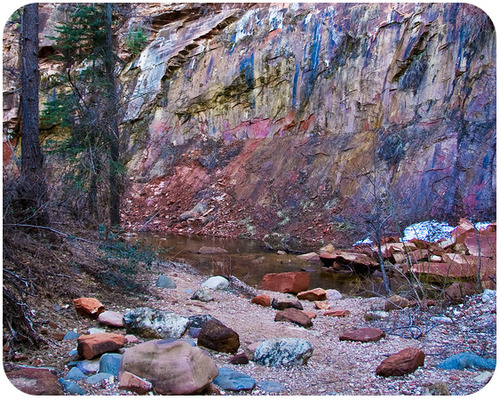 In the dry Arizona desert, Oak Creek and many other streams are spring fed. 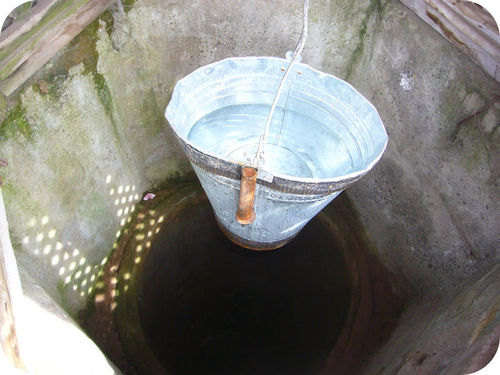 An old-fashioned well that uses a bucket drawn up by hand.

2. What is the water table?

3. What are aquifers and why are they so important?

6. Since groundwater is largely unseen from the surface, how might you monitor how humans are affecting the amount of groundwater in an aquifer?