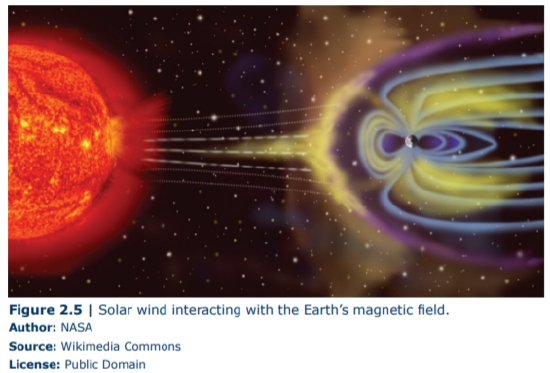 The magnetic field changes constantly and has experienced numerous reversals of polarity within the past, although these reversals are not well understood. Study of past reversals relies on paleomagnetism, the record of remnant magnetism preserved within certain rock types. Iron-bearing minerals that form from lava can align with the Earth’s magnetic field and thus provide a record of the magnetic field in the Earth’s past. However, this preserved magnetism could be lost if the mineral in the rocks has not been heated above a temperature known as the Curie point (a temperature above which minerals lose their magnetism). Essentially, the iron atoms “lock” into position, pointing to the magnetic pole. This records the alignment of the magnetic field at that time (we currently are in a normal polarity, in which north on a compass arrow aligns closely with geographic north, or the North Pole). If the magnetic field was stationary, all of the magnetic minerals would point in the same direction. This is not the case, however. Reversals occur rather frequently on the geologic time scale. Not only do magnetic poles reverse over geologic time but they also wander. Paleomagnetic data show that the magnetic poles move systematically, wandering across the globe. Polar wandering curves have been created to display the migration of the poles across the Earth’s surface over time. Apparent polar wander refers to the perceived movement of the Earth’s paleomagnetic poles relative to a continent (the continent remains fixed) (Figure 2.7). As you will learn in the Plate Tectonics chapter, polar wandering curves provide excellent evidence of the theory that the plates move, as curves for different continents do not agree on the magnetic pole locations. They all converge on the current pole location at present day, however.