Circulation of water throughout the world’s oceans occurs by one of two major modes: surface currents or thermohaline circulation. The former resides in the upper few hundred meters of the oceans and are predominantly controlled by winds. The latter is regulated by density. The main drivers of density in the ocean are temperature (thermo-) and salinity (-haline). Together, these two physical parameters dictate particular ocean water mass densities, the driving force behind large-scale, deep circulation. Cold, salty, dense water sinks and pushes other water masses around the ocean on a very slow scale. In general, as a result, thermohaline circulation causes warm water to flow poleward near the surface; in turn, this warm water cools and becomes denser. The water mass then sinks and begins flowing south toward the equator. 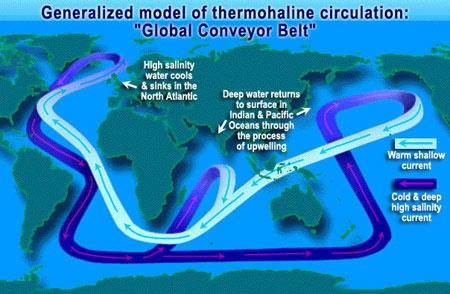 Where does it all begin? Thermohaline circulation is driven by the formation of North Atlantic Deep-Water (NADW), and Antarctic Bottom Water (AABW). Collectively these terms are referred to as deep water. Because the Earth is a sphere, the sun’s energy warms the globe unequally, with most of the energy concentrated along the equator and the least amount of energy reaching the poles. The Gulf Stream facilitates the movement of warm equatorial waters through the tropics and subtropics north to the North Atlantic. Along this transit, the water becomes more saline due to evaporation. As the salty mass proceeds northward toward the sub-Arctic regions, it also cools. It can cool enough for sea ice to form, which leaves salt behind, causing the water to become even saltier and denser. Consequently, water jettisoned to the Norwegian Sea and the Arctic Ocean by the Gulf Stream becomes dense enough to sink out, and thus NADW is formed.

Try this easy-to-do at-home experiment shared by Dr. Mirjam S. Glessmer. It can potentially help you better understand how the temperature and salinity differences of water lead to North Atlantic Deep-Water circulation!

Transit Through the Ocean

“This animation first depicts thermohaline surface flows over surface density, and illustrates the sinking of water in the dense ocean near Iceland and Greenland. The surface of the ocean then fades away and the animation pulls back to show the global thermohaline circulation,” (Olsen et al 2013).

Deepwater is formed in several places around the world. As discussed above, most NADW forms in the North Atlantic, specifically in the Norwegian, Labrador, and Greenland Seas were the Gulf Current cools (also known as Atlantic Meridional Overturning Circulation). However, some NADW forms in the warmer waters of the Mediterranean. This water may not be as cold as polar sources but gains its density from its extremely salinity. Deepwater production sites in the Mediterranean include the Gulf of Lions, the Southern Adriatic Pit, and the Cretan Sea. Antarctic bottom water is formed during the production of large amounts of sea ice off the coast of Antarctica. The ice formation increases the salinity of the frigid surrounding waters, producing some of the densest seawater in the world. As its name implies, this water sinks right to the seafloor, displacing even NADW. This phenomenon occurs mostly in the Weddell and Ross Seas. Because of the proximity of these sites to large ice sheets, global warming could have strong effects on the rates of deep water formation. Freshwater runoff from melting glaciers can dilute surface salinity, decreasing density and stopping water from sinking. This in turn could slow global thermohaline circulation and have profound effects on how heat cycles on our planet. See Toggweiler and Key (2001) for an excellent introduction to thermohaline circulation www.researchgate.net/publication/242569649_Thermohaline_Circulation