Young's modulus illustrates the relationship between stress and strain in a material.

where \(E\) is Young's modulus, \(\sigma\) is the uniaxial (one directional) stress, and \(\epsilon\) is the strain. Since stress has units of pressure (Pa) and strain is dimensionless as we saw in the last section, Young's modulus has units of pressure (Pa). Essentially, it measures the ability of an object to resist deformation when a force is applied. It determines to what degree a material will deform in response to elastic stress.

One characteristic of elastic deformation is that it is reversible. Thus, after the stress is removed, the material will return to its original shape. This can be seen in the spring discussed in the last section. After the spring is no longer stretched, it returns to its original form. This is one caveat to measuring elastic strain in the rock record, rocks only record permanent strain. However, we can still use the concept in the lab to understand the magnitude of stresses and how much more stress is needed to cause a rock to fail.

Another way we can characterize a material's response to stress is with Poisson's ratio. This is a measure of how when compressed, a material expands perpendicular to the direction of compression. Think of a metal cylinder being compressed by a vice. Additionally, when a material is stretched, it will contract in the directions perpendicular to the stretching direction. Think of stretching a rubber band and noticing how it gets thinner in the middle. In essence, Poisson's ratio tells us how much a material will deform in the lateral direction when either compressed or stretched.

From the above figure, we can say that:

Understanding a material's response to stress in 2D has a natural application to 3D. Hooke's law models a material with 3D stress and strain (triaxial loading), using the previously discussed relationships, Young's modulus and Poisson's ratio. Hooke's law is

for the x direction,

for the y direction, and

for the z direction. To calculate the total strain, simply sum the strain in the x, y, and z directions. 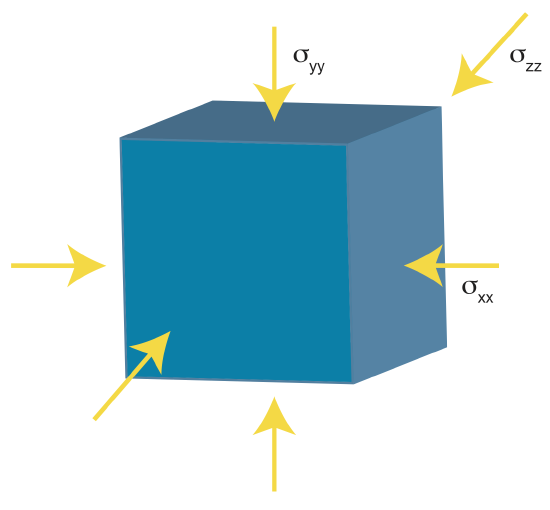 Let's apply this to a real example of lithostatic stress. We want to calculate the stress in the z direction. We are given that E=5 GPa, \(\nu\)=0.25, and the strain is equal in all directions such that

The forces that create tectonic stresses are density anomalies in the mantle that drive convection and move the plates. \(\sigma_{H} > \sigma_{v}\) in the case of compression and \(\sigma_{H} < \sigma_{t}\) in the case of extension. Except in cases of very shallow rock, the total stresses on a rock are all positive. Thus, in regions with normal stress, the magnitude of tectonic stress is less than the magnitude of lithostatic stress.

In regions of shear, there are two tectonic stresses, instead of just one in a normal stress region (extension or compression). \(\sigma_{lith}\) becomes an intermediate stress. A famous example of shearing is the San Andreas Fault (SAF). 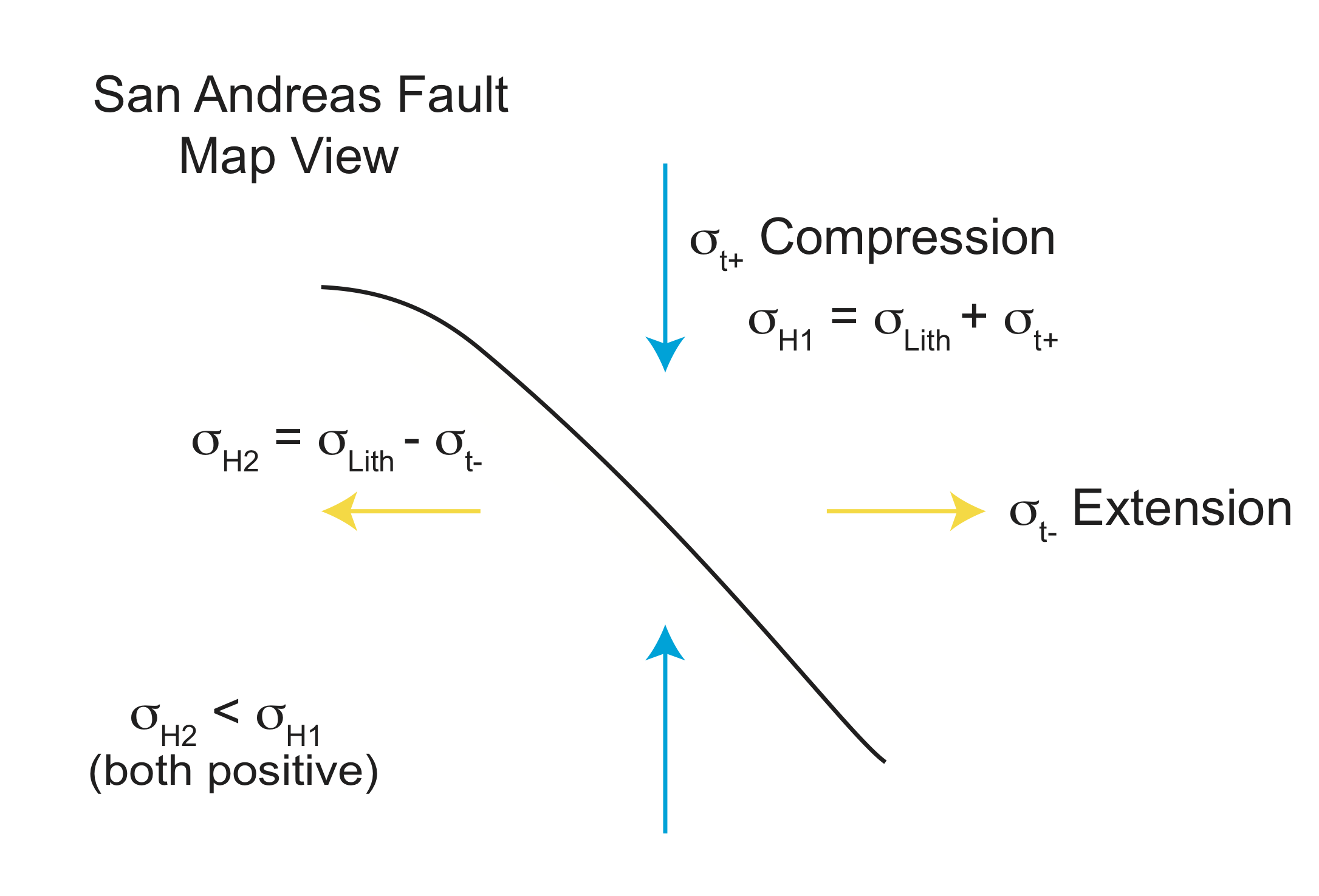 Note in the SAF figure that on the fault there are normal stresses and shear stresses as well. From the figure of the SAF, we can see a real life example of how the normal and shear stresses relate are oriented in a fault. Side note: for those who have had linear algebra, \(\sigma_{lith}, \sigma_{H_1}, \sigma_{H_2}\) are principal stresses which are both direction eigenvectors and magnitude eigenvalues. There are only three planes that have normal stresses. It is important to note that the magnitude of the normal and shear stresses depend on the orientation of the plane.

When thinking about faulting, we can consider any orientation of planes. However, only 3 planes will have \(\sigma_{s}=0\).