When a force is applied to a rock, this produces stress. Stress is a force per unit area applied on a rock. It can be represented in units of Pascals (Pa) which is the equivalent of one Newton per meter squared \(\frac{N}{m^2}\) or \(\frac{kg}{ms^2}\). In other words, stress is force divided by area, or \(\sigma=\frac{F}{A}\). An important differentiation must be made between stress and traction. Stress is a tensor, its two parameters being the intensity of the force and the plane on which that force is acting. However, traction is a vector because it has only one parameter, the intensity of the force on the particular plane.

There are several types of stress, all of which indicate differing directions the force is applied. Normal stress acts at right angles to surfaces, and can either push a rock together (compression) or pull it apart (tension). 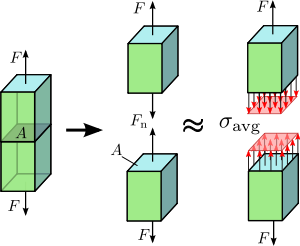 If all stresses are equal, ie there is no applied tectonic stress, then this is the pressure. A key pressure in geology is lithostatic pressure, litho ⇒ rock and static ⇒ not moving. When this stress is applied, initially the rock "squishes" due to the applied force. This squishing is called strain, which is how a rock changes in shape or size as a result of stress. There are two primary types of strain, normal and shear. Normal (extensional) strain is likely already a familiar concept, it can be seen when a spring is stretched. The strain is a result of the initial and final lengths of the spring. Thus, extensional strain can be described as

where \(L\) is the original length of the material and \(l\) is the final length. The greater the stretching of the spring, the larger the extensional strain. The strain ratio is a dimensionless quantity since both the numerator and denominator have the units of length, and is often expressed as a percentage. When a normal stress is applied to an object, a normal strain is the result. Normal strain is commonly seen at divergent (extensional) plate boundaries or rift zones where the rock is being pulled apart.

Convention states that if the angle between the x and y axes decreases, the shear strain is positive, and if the angle increases, the shear strain in negative. In general, compression is a positive value and extension is negative value. Like extensional strain, shear strain is a ratio and is thus dimensionless. This type of strain is commonly seen is shear zones, which can develop into a fault where tectonic plates slide past each other. Intense deformation results from this type of strain and can lead to the folding of rocks or foliation.

To better understand how to calculate shear strain, let's look at the following right lateral fault. Knowing that the change in length perpendicular to the width of the shearing region measures shear strain, we can represent these changes on x and y axes. Let's try another real world example to summarize our knowledge about stress. Looking at the figure below, let's calculate the stress 10 km below the surface. Now we are ready to answer the question.