Meandering Rivers are located on flat terrain that reduces the flow speed of water, allowing the river to curve or "meander". The bends in the river will migrate back and forth within the river valley. There is a differentiation in flow speeds within a meandering river channel that produces areas of erosion and deposition. There are distinct sedimentary structures that result from this process. 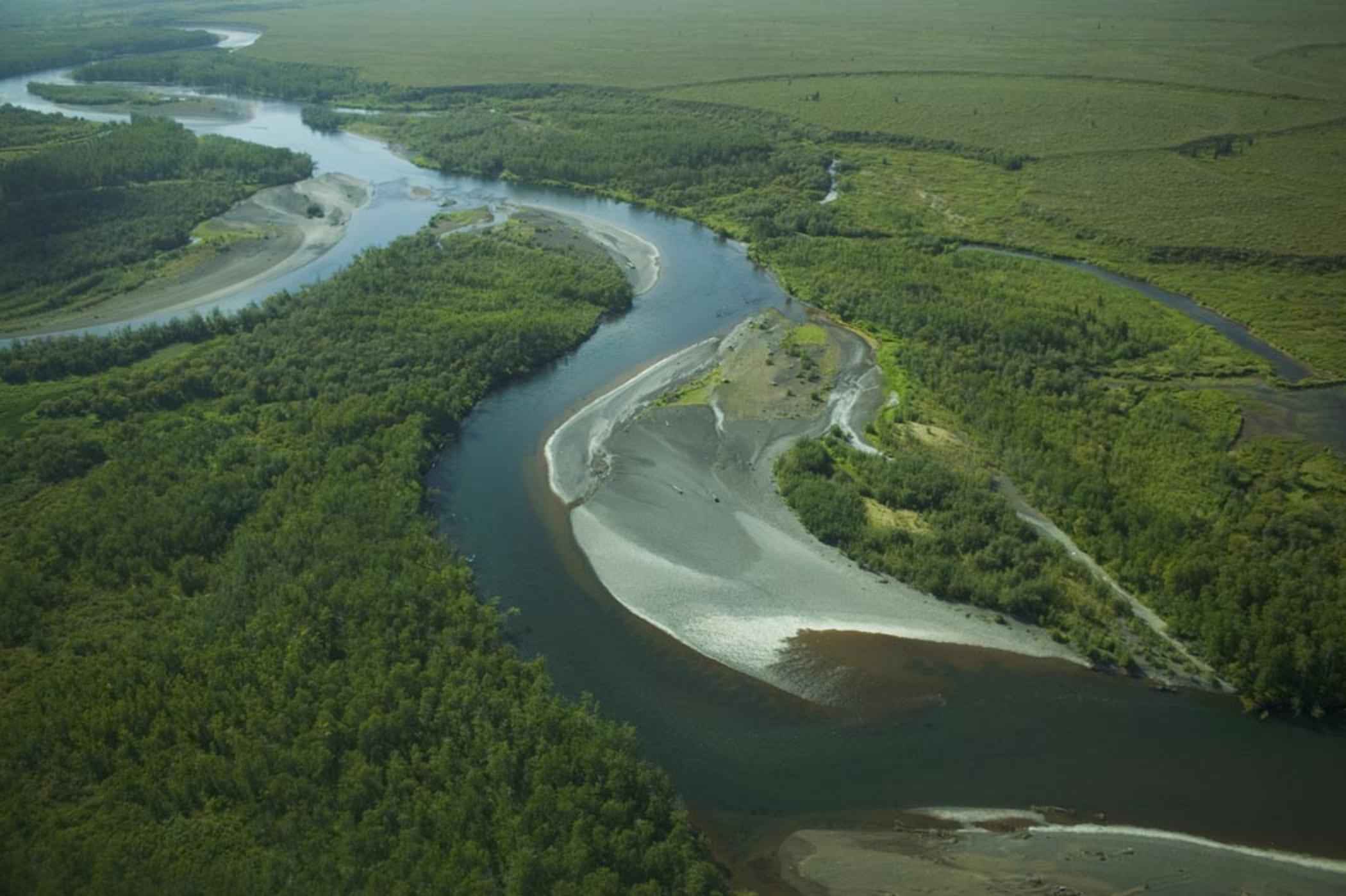 When the water moves around a curve, the velocity of the water is highest along the outer part of the channel. This area is referred to as the bank of the channel, and it is where erosion of sediment occurs. Erosion is caused by the increase in flow velocity, which has the force to erode and transport sediment from the bank. On the inside bend of the river, known as the point bar, water velocity is slower because it doesn't have to travel as far as the water on the outside of the bend. This allows sediment to settle out and be deposited. As this cycle of erosion and deposition continues, the river will migrate in it's river valley. This migration can lead to the creation of an oxbow lake, which is described further here: https://geo.libretexts.org/Courses/University_of_California_Davis/UCD_GEL_109%3A_Sediments_and_Strata_(Sumner)/Textbook_Construction/Floodplains_and_Oxbow_Lakes.

Due to the higher velocity in the middle and outside bend of the river channel, coarser sediment will be deposited in those areas. The coarser grains will be transported to these parts of the river channel because the higher velocity is able to transport the heaver grains. This is related to the concept of Reynolds Number, which measures whether sediment transport of a specific grain size will be able to occur based on the velocity of the water.

There are two distinct areas within the river channel that are characterized by different flow speeds and grain size, the outer edge and the inner bend of the channel. The different flow speeds will carry different sized sediment grains, which will produce a cross section that is asymmetrical. The coarser grains will be present in the outer edges of the channel, while finer sediment will be along the inside of the channel. The different flow speeds within the channel, along with the different grain sizes, will produce unique sedimentary structures. The coarser grained areas that result from a faster flow speed will have upper planar lamination or dune cross stratification. The point bar of the river will produce current ripple lamination, due to the finer sediment and slower flow speeds. As the river migrates towards the direction of the eroding bank, the current ripples of the point bar will end up being deposited on top of planar lamination/dune cross stratification of the bank.

The typical facies that occur within a meandering river environment include a scoured base of flow, which is caused by the high flow velocity in the middle of the channel that is able to pick up and transport large sediment particles. There would also be a lag deposit of mud rip-up clasts and the coarsest sediment within the facies. A lag deposit is where physical processes remove the finer sediment, leaving behind the course grains. As we move upward in the stratigraphic column, the grain size will become more fine. The structures you should find are trough cross stratification, rippled sands, and finally sigmoidal cross stratification resulting from the point bar migration.

Periodically, the river will flood, causing its floodplain to fill with fine-grained sediment. This is due to the water flow velocity decreasing as it flows away from the river channel. More information on floodplains can be found on the previously linked page on Oxbow Lakes and Floodplains. The floodplain facies will be incorporated into the typical meandering river facies. Figure 2: A typical stratigraphic column for a meandering river system with the lag deposits on the bottom, followed by trough cross stratification and ripple cross lamination. This is overlain by a typical floodplain facies that is composed of mud cracks and root traces in a fine grained sediment. https://www.geol.umd.edu/~jmerck/geol342/images/10pointbarfloodplain.jpg