Freshwater lakes are inland bodies of water, typically formed from depressions in the earth's surface. These basins usually form from continental extension, strike slip faulting, or as sag basins. They are bounded by sills, and usually fed by streams and rivers from the surrounding environment. If there are channels that output water and sediment, the lake is hydrologically open. Hydrologically closed lakes (only water and sediment input) may also be freshwater if their dissolved ion concentrations are low enough. Freshwater has a solute concentration below approximately 5 grams per liter.

Water is the primary media of sediment transport into and out of lakes, but wind may also deposit or erode sediment. Liquid water flow from channels is turbulent and depends on channel width, depth, and flow speed. Flow is largely constrained to above 10 to 20 meters lake depth; this upper oxygenated portion is called the epilimnion. Wind driven surface currents may be up to 30 centimeters per second in speed. They produce waves which may transport sediment around the lake, but wind usually only erodes sediment above the water level. Waves also mix the water and facilitate diffusion of oxygen in the upper layers of the lake.

Sediment is usually carried to and from lakes by water from channels, but wind may also transport fine sediment. Flows from channels that move sediment are turbulent, with coarser grains under upper planar flow and fine grains being carried in suspension.  Slower flow speeds produce dunes and current ripples, which are asymmetrical. Waves are also responsible for shaping lake shorelines, by both eroding and depositing sediment to make beaches. Waves may form from both air and water flows over the lake. They tend to produce wave ripples, which are symmetrical.

Grains move via in several ways within channels and lakes, depending upon the lift force produced by the transporting fluid: 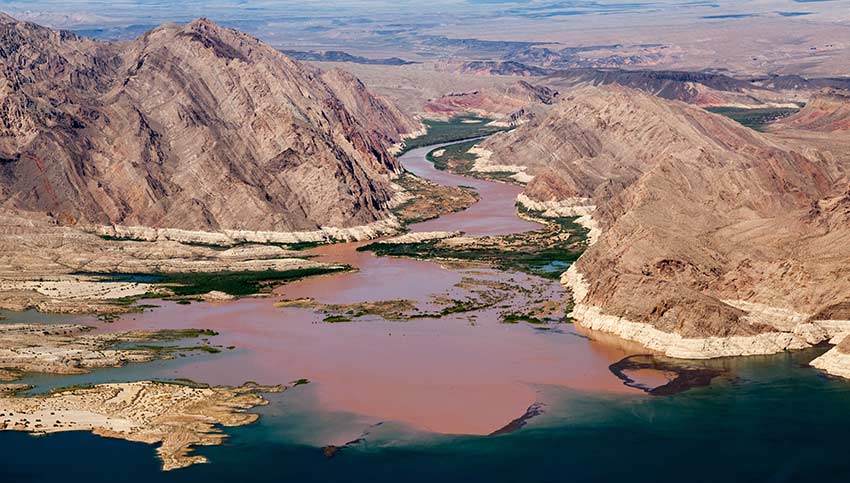 add a description of what the reader should pay attention to, e.g. why is part of it red, what is the light band above the water level

Figure 2 shows the Colorado River draining into Lake Mead. Note the plumes of fine rust colored sediment being transported in suspension. The lighter bands of rock above the shoreline are previous shorelines. Fine to coarse grained sediment may be carried into a lake. Fine sediment is carried in the epilimnion for away from the lake margins, while coarse sediment immediately drops out of suspension into the hypolimnion and forms turbidites. Grading of beds is typically fining upwards, especially near the mouths of rivers transporting sediment.

Lake levels are determined by inputs of water and sediment.  Many freshwater lakes rely on sediment and fluid input from rivers, so I suggest visiting the chapter on them here for more information.

Waves are also really important, helping make beaches and erode shorelines. I recommend adding something about them, especially since you mention wave ripples as one of the most common structures in lake deposits.

Sand and mud sized grains are most common, but carbonates, evaporites, and organic material may also be present. Sand is most common on the shoreline, but may also form parts of the lake floor in shallower areas. Mud may be in deep lake or overbank floodplain deposits. Cobbles and gravel occur in turbidites, mostly at their bases.

Structures in lake deposits resemble those in other low energy environments, but with their own unique features. Wave ripples and parallel laminations are the most common structures. Wave ripples only appear in shallow or nearshore lake deposits. This is because they form from wind currents, which produce elliptical motion at the lake's surface. This is gradually translated vertically into standing waves at the bed surface, leading to symmetrical ripples.

Other structures include root casts, mud cracks, and signs of bioturbation. Root casts and mud cracks form when the lake's shoreline recedes, exposing finer silt and clay to air. Plants colonize this exposed sediment and leave root casts. Mud cracks form due to the desiccation of the sediment, but because clay is cohesive, the bed doesn't fall apart. Bioturbation is when organisms dig into and churn sediment to make living burrows, escape from predators, or forage for food. Be sure to describe where the root cases and mud cracks form relative to the lake shoreline. They require changes in lake level to form, typically, so adding something about what determines lake level would be helpful (especially given your image of Lake Mead above)

The most common organisms found in lake sediments are gastropods, bivalves, and ostracods. Shells and calcareous algae also form the source of much calcareous mudstone called , which may be deposited at the margins or deeper depths of lakes. Vertebrates are also known. Charophytes, a type of green algae, are also indicative of freshwater lake environments due to their intolerance of saline water.

Flow typically transitions from more to less energetic over time. This is reflected in bedding layers as fining upward, where gravel transitions to sand, then silt and mud. Figure 5 above shows fluviolacustrine deposits from a Triassic locality in South Africa, specifically those in the Burgersdorp formation. You can see both abrupt and continuous changes in grain size and sedimentary structures. The sinuous lines represent erosional surfaces, while the linear ones represent gradual change. The coarsening upward beds, changing from mudstone to fine sand, show an increase in flow speed and turbulence, suggesting a regression of the shoreline. Conversely, the fining upward beds suggest a transgression due to the lack of turbulent flow allowing mud and silt to settle from suspension. Lake shorelines fluctuate frequently over time, which we can see through the presence of erosional surfaces, changes in grain size, and sedimentary structures. These differences in grain size and structures reflect lake margin and deep lake facies. Lake margin facies are typically coarse grained with sand or gravel, and their most common structures are wave ripples and current ripples. Deep lake facies typically consist of fine mud and frequently have planar laminations.

Deep lake facies consist of clay and silt sized sediments, with their main structures being parallel laminations. The Bouma sequence above depicts a turbidite deposit, with gravel and coarse sand transitioning to very fine sand and then mud. These deposits form when debris flows drop sediments down a sloping surface, frequently near the mouths of rivers depositing sediment. The gravel and coarse sand drops from suspension first, then the fine sand, with the mud eventually settling from suspension when the flow loses enough energy. Turbidites are explained in more detail here. Variations in this sequence also appear in alluvial deposits, explained in more detail here. Overbank deposits in lakes may also form fine laminated mud, but unlike deep lake facies, the mud frequently has root casts.

This is where things get interesting!

For more than the past 30 years, many exceptional fossils have been found in China. One of their most famous and productive formations is the Yixian Formation located in the Liaoning province of northeastern China. It's early Cretaceous in age, between approximately 139-122 Ma. It is divided into at least three members: the lowermost Lujiatun Member, composed of fluvial and volcaniclastic rocks, the Xiatulaigou Member, composed of basaltic lava flows and associated breccias, and the Jianshangou Member (Wang et al, 2016).

The Jianshangou Member is a lacustrine component of the Yixian formation, and is highly fossiliferous. It has 4 subunits, or beds, with distinctive characteristics (Wang et al, 2016). The basal most is the Dajianshanzi bed, which is largely composed of volcaniclastic sediments and has freshwater bivalves. Then there is the Anjiagou Bed, composed of fine laminated mud interbedded with fine volcanic ash, which produced the first known feathered dinosaur Sinosauropteryx and birds such as Confuciusornis. Further up section is the Hengdaozi Bed, consisting of light mudstones and sandstones interbedded with ash. It preserves large amounts of insect and angiosperm fossils. Finally, the Huangbanjigou Bed consists of mudstones with varying degrees of lamination along with ash. The Jianshangou Member generally preserves a remarkably complete fossil record of the ecosystem, including gymnosperms, angiosperms, insects, molluscs, non-avian dinosaurs, birds, and mammals. Collectively, they're referred to as the Jehol Biota. It is the dinosaurs from this and similar beds that revealed the prevalence of feathers among non-avian dinosaurs, and they contain some of the earliest known flowering plants as well, such as Archaefructus.

One of the dinosaurs preserved in the Yixian beds is Psittacosaurus, a small dinosaur related to Triceratops. Several species are known. The exceptional preservation occurs due to the very fine mud and volcanic sediments, along with a very low energy depositional environment. This individual likely died and stayed in place, and was buried by successive layers of mud and ash settling from suspension. This allowed not only the bones, but imprints of the scaly skin and other soft tissues to be fossilized. The skin is  preserved as residues of calcium phosphate, which the scales contained in life (Vinther et al, 2016). The preservation is so fine that impressions of the melanosomes, the tiny organelles that produce pigment, are visible under an electron microscope (Vinther et al, 2016)! Additionally, the scales show conspicuously different textures on different areas of the body. 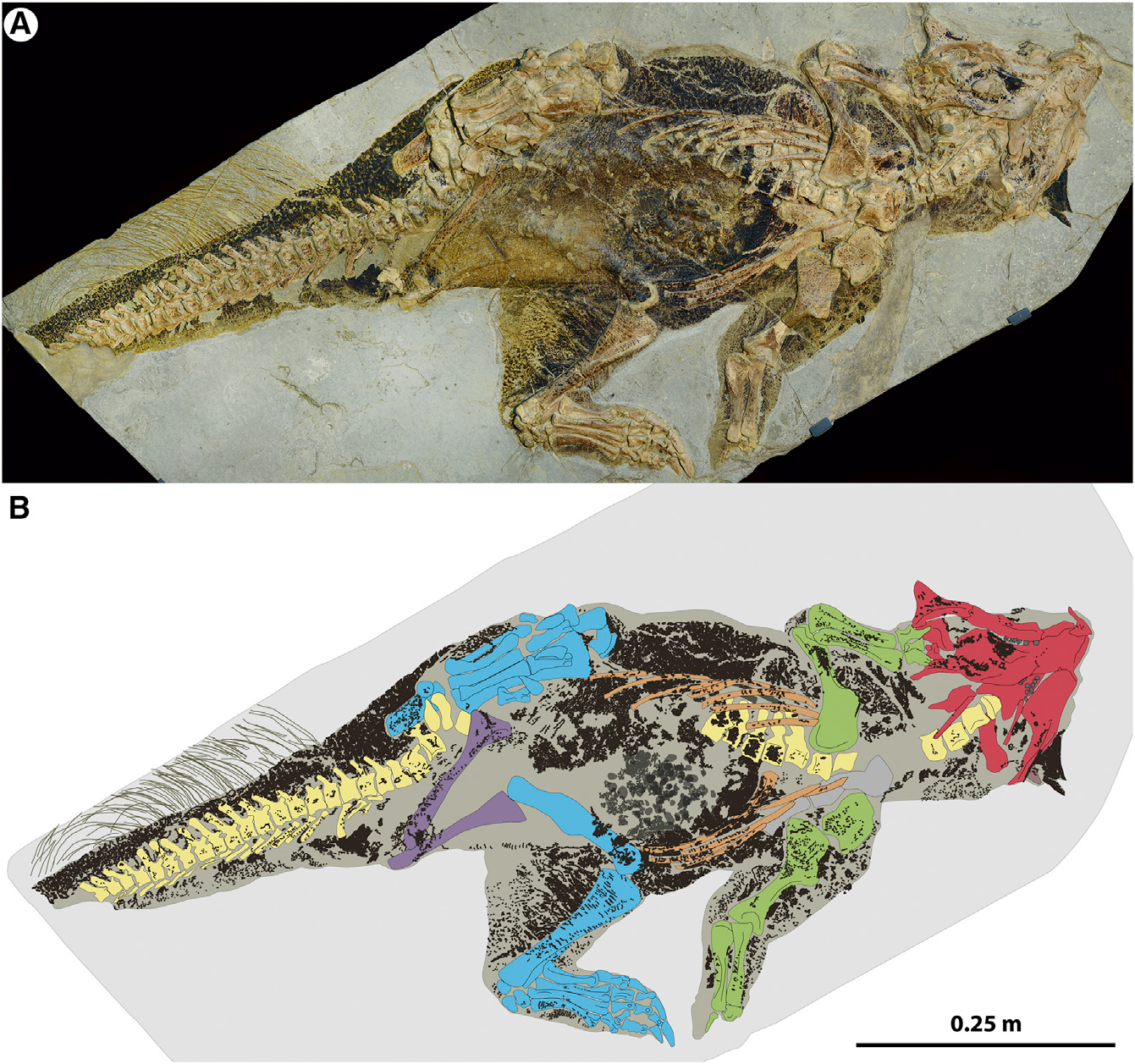 Figures 8 and 9: Psittacosaurus sp. SMF R 4970 under cross polarized light and a model reconstruction. The darker portions of the specimen in Figure 7 are melanin residues, showing pigmentation variations on different areas of the body. The dinosaur was buried on its back, and the body was slightly crushed by the overburden. Both figures taken from Vinther et al. 2016.

Freshwater lakes consist of inland bodies of water supplied by rivers and streams. Waves are common physical phenomena that shape the deposition and sedimentary structures of beds. If we're incredibly lucky, as we are with the Yixian formation, lakes can provide us with a magnificent view of prehistoric life almost literally in the flesh.