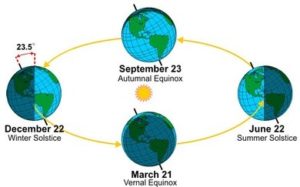 EQUINOX
Halfway between the two solstices, the Sun’s rays shine most directly at the equator, called an “equinox.” The daylight and nighttime hours are exactly equal on an equinox. The autumnal equinox happens on September 22 or 23 and the vernal or spring equinox happens March 21 or 22 in the Northern Hemisphere.