The Phylum Echinodermata is distinguished by characteristics such as spiny-skin, pentaradial symmetry, and an endoskeleton composed of calcareous ossicles.  Given that all species in this phylum are exclusively marine dwellers, they also evolved a specialized water-vascular system. This includes several canals, that comprise part of a hydraulic system for functions such as the extension of limbs, movement, nutrient distribution, gas exchange and feeding [4].  Another fascinating aspect of Echinoderms is that the water vascular system also includes the tube feet with powerful suction capability. Due to the structural makeup of these organisms, largely in part to their calcareous plates, they dry and preserve well as both specimens and fossils. The photo below features a dried sea star.  Sea star is a broad ecological term that refers to the entire Class Asteroidea.  Sea stars typically have five arms, which they rely upon for movement; these animals also utilize their limbs and the various forms of tube feet on them for the capture and drawing in of prey.  Their diet includes but is not limited to: gastropods, bivalves and many annelid worms.  Interestingly enough, most Asteroidea in nature protrude their stomach outside of the body through the mouth to digest prey externally. This allows them to digest organisms they have captured and rest on top of.  The aboral surface of the specimen shows the spiky-skin described above, jutting out from calcareous plated dermis.  The small white structure, slightly off center to the left is the sieve plate or madreporite.  This structure is the exterior opening to the water-vascular system of the sea star. The oral surface shows many interesting distinctions.  Among them, ambulacral grooves lining the arms.  Lining the ambulacral groove are several dozen podia, which are also called tube feet. These podia are the primary mechanism for movement and predation.  In the aboral view shown below, the tube feet as the tiny black structures that appear sunken into the organism (this is due to the fact that this specimen is long dead). The class Ophiuroidea (brittle stars and basket stars) is related to the asteroids but they are more morphologically slender, the arms do not contain tube feet, and they are distally stretched from the central disc.  In the case of the basket stars, the structure of their limbs is highly branched, resembling capillary systems, or an entire conglomeration of roots.  The complexity of these limbs may be attributed to evolutionary advantages from an increase in the surface area to volume ratio for gas exchange and feeding. The ability to reach out and capture large zooplankton prey without excess expenditure of energy is favorable to these organisms.  The brittle star on the other hand exhibits an almost-serpentine like movement of the arms, giving them the nickname serpent stars.  The diet of these organisms is very generalist, as they will consume essentially anything that they can come in contact with. A special note in the story of the brittle star comes from recent reports that some brittle star species may actually share a symbiotic relationship with corals.  An observational study in 2010 showed deep sea corals in the Gulf of Mexico covered in a substance called floc, which is speculated to be an odd combination of trace amounts of oil, dispersants, and excess mucus from stressed or sickly corals.  Brittle stars were observed brushing off this substance which would have likely otherwise lead to the death of some very old coral reef colonies [ Smithsonian-Ocean ].  The extent and mechanism of this relationship is still not fully understood.

Echinoidea is the class of Echinoderms that includes sea urchins, sand dollars, sea biscuits and others. The spines observed on these organisms are actually mobile, which serves to enhance protection, feeding, and aid in movement.  Echinoidea are encased in an endoskeleton commonly called a test.  Much like other endoskeleton exhibiting marine dwellers, the test is comprised of calcium carbonate [3].  Other morphological characteristics to note are that sea urchins exhibit longer spines than other members of the class such as heart urchins and sand dollars where the latter are very short relative to the organism’s size [4]. Sea cucumbers are a unique, divergent class from the rest of the Echinodermata. Unlike their counterparts, their ‘skeletal’ structure is greatly reduced, resulting in a soft body that is malleable and has many captivating traits.  Without any arms, class Holothuroidea relies on small tentacles that surround the mouth.  They prey on minuscule food items that are afloat in the oceans or that rest on the benthic level of the ocean floor [4]. “Sea cucumber suspended in preservitive, 2019” by Jason Charbonneau [CC by 4.0]

Some unique aspects of sea cucumbers lie in their rather interesting defense mechanisms. If touched or squeezed, they will rapidly shrink in size and project water from several pores all over their body which hardens as they shrink. They can also expel all of their internal organs allowing predators to feed on them, but later they can regenerate these parts which is nothing short of astonishing. They also have mutable connective tissue and can quickly change the shape and texture of their body.

The Class Crinoidea includes the feather stars and sea lilies. The defining characteristic of this class is that they anchor themselves to a substrate through the use of cirri.  These cirri are attached to a long stalk which keeps them in place, as most of the species comprising this phylum are sessile.  There is an exception to this general rule in the case of Analcidometra armata, commonly called the swimming crinoid.  This is a rare group of Crinoids that may be observed across the Caribbean; they use their ten arms to gently manipulate water as a medium in order to become mobile [Marine Species Identification Portal].  These Crinoids are threatened species and if seen they should not be touched! 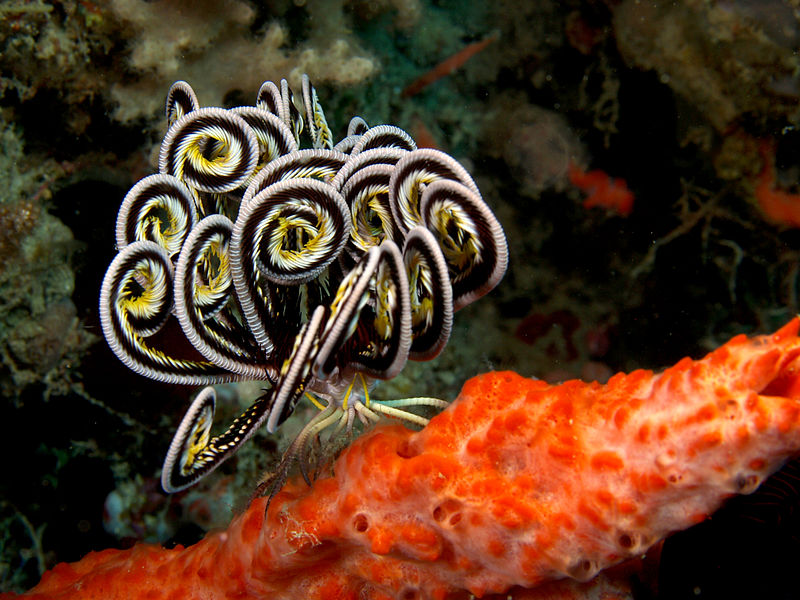