There have been several minor but important modifications to Dalton’s atomic theory. For one thing, Dalton considered atoms to be indivisible. We know now that atoms not only can be divided but also are composed of three different kinds of particle, subatomic particles, with their own properties that are different from the chemical properties of atoms.

The first subatomic particle was identified in 1897 and called the electron. It is an extremely tiny particle, with a mass of about 9.109 × 10−31 kg. Experiments with magnetic fields showed that the electron has a negative electrical charge. By 1920, experimental evidence indicated the existence of a second particle. A proton has the same amount of charge as an electron, but its charge is positive, not negative. Another major difference between a proton and an electron is mass. Although still incredibly small, the mass of a proton is 1.673 × 10−27 kg, which is almost 2,000 times greater than the mass of an electron. Because opposite charges attract each other (while like charges repel each other), protons attract electrons (and vice versa).

Finally, additional experiments pointed to the existence of a third particle. Evidence produced in 1932 established the existence of the neutron, a particle with about the same mass as a proton but with no electrical charge, it is neutral. We understand now that all atoms can be broken down into subatomic particles: protons, neutrons, and electrons. Table \(\PageIndex{1}\) lists some of their important characteristics and the symbols used to represent each particle.

How are these subatomic particles arranged? Between 1909 and 1911, Ernest Rutherford, a Cambridge physicist, and his associates Hans Geiger and Ernest Marsden performed experiments that provided strong evidence concerning the internal structure of an atom. They took a very thin metal foil, such as gold or platinum, and aimed a beam of positively charged particles (called alpha particles, which are combinations of two protons and two neutrons) from a radioactive source toward the foil. Surrounding the foil was a detector—either a scintillator (a material that glows when hit by such particles) or some unexposed film (which is exposed where the particles hit it). The detector allowed the scientists to determine the distribution of the alpha particles after they interacted with the foil. Figure \(\PageIndex{1}\) shows a diagram of the experimental setup. Figure \(\PageIndex{1}\): The Geiger-Marsden Experimental Setup. Experiments using this setup were used to investigate the structure of atoms. In this experiment, most of the particles traveled straight through the foil, but some alpha particles were deflected off to one side. Some were even deflected back toward the source. This was unexpected. Rutherford once said, “It was almost as incredible as if you fired a 15-inch shell at a piece of tissue paper and it came back and hit you.” (CC SA-BY 3.0; Kurzon).

Rutherford proposed the following model to explain these experimental results. Protons and neutrons are concentrated in a central region he called the nucleus (plural, nuclei) of the atom. Electrons are outside the nucleus and orbit about it because they are attracted to the positive charge in the nucleus. Most of the mass of an atom is in the nucleus, while the orbiting electrons account for an atom’s size. As a result, an atom consists largely of empty space. Rutherford called his description the “planetary model” of the atom. Figure \(\PageIndex{2}\) shows how this model explains the experimental results. Figure \(\PageIndex{2}\): Rutherford’s Metal Foil Experiments. Rutherford explained the results of the metal foil experiments by proposing that most of the mass and the positive charge of an atom are located in its nucleus, while the relatively low-mass electrons orbit about the nucleus. Most alpha particles go straight through the empty space, a few particles are deflected, and fewer still ricochet back toward the source. The nucleus is much smaller proportionately than depicted here.

The planetary model of the atom replaced the plum pudding model, which had electrons floating around aimlessly like plums in a “pudding” of positive charge.

Rutherford’s model is essentially the same model that we use today to describe atoms but with one important modification. The planetary model suggests that electrons occupy certain specific, circular orbits about the nucleus. We know now that this model is overly simplistic. A better description is that electrons form fuzzy clouds around nuclei. Figure \(\PageIndex{3}\) shows a more modern version of our understanding of atomic structure. 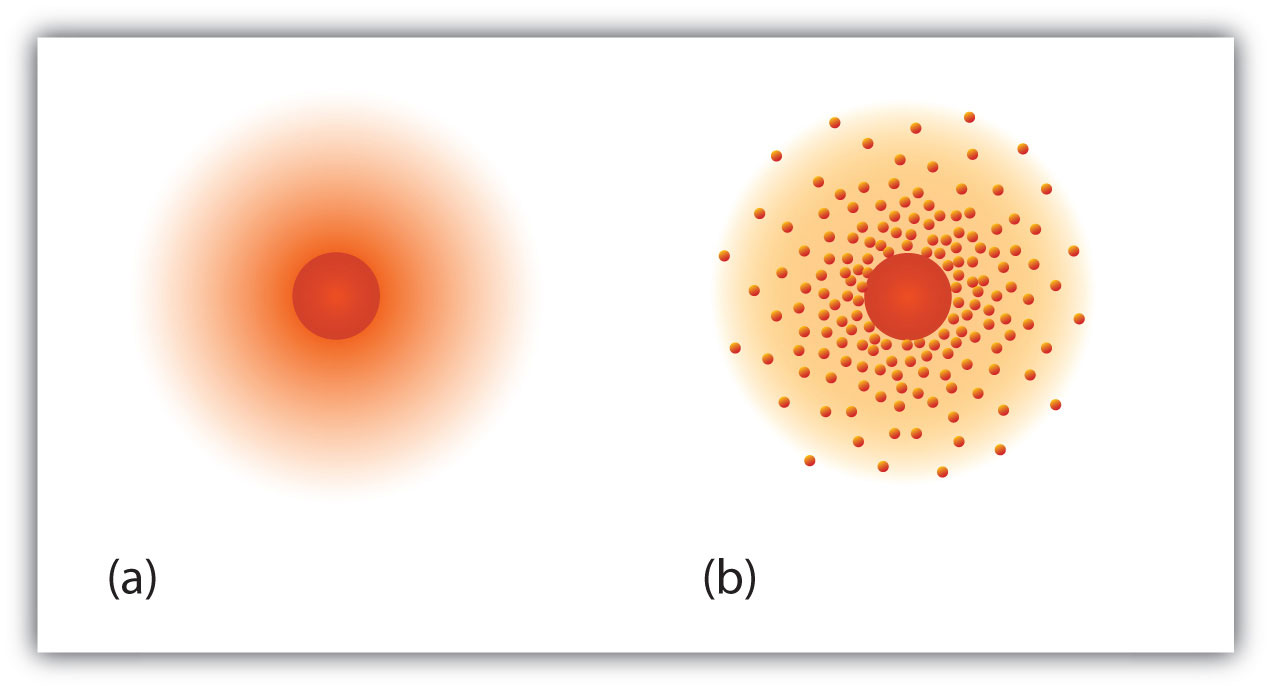