Let’s begin by looking at a few basic facts about the oceans. We often think of Earth in terms of its land area, but in reality 71% of the Earth’s surface is covered by oceans, while only 29% is land. Oceans cover an area of 139 million miles2 or 361 million km2, and contain a volume of about 1.37 billion km3 of water. All of this water is not distributed equally over the Earth; 61% of the Northern Hemisphere is covered by oceans, while in the Southern Hemisphere the oceans cover 81% of the surface area (Figure \(\PageIndex{1}\)).

Various sources differ in the number of recognized ocean basins. Historically the major oceans were recognized as the Pacific, Atlantic, Indian, and Arctic Oceans. More recently, the Southern Ocean has been recognized as fifth named ocean, comprising all of the water from the coast of Antarctica to 60o S (Figure \(\PageIndex{2}\)).  In 2000 these boundaries were submitted to the International Hydrographic Organization for official recognition, but several countries do not recognize it as a separate ocean, but rather as the southern extension of the other major oceans. The Southern Ocean has its own unique characteristics, so for the purposes of this book we will include it as a separate ocean.

The oceans account for vast amounts of water, containing 97% of the water on Earth’s surface, with over half of the water in the Pacific alone (Table 1.1.1).

The average depth of the world ocean is about 3800m (12,500 ft), which is about four times deeper than the average land elevation is high (840m or 2800 ft). In fact Mt. Everest, the highest point on land, is 8848m (29,028 ft) high, while the deepest part of the ocean, the Challenger Deep of the Marianas Trench is 11,022m (36,200 ft) deep. So you could submerge Mt. Everest in the Marianas Trench and it would still be covered by over 2 km of water! Because there is so much more water on Earth than there is land, if you could smooth out the land elevation the entire Earth would still be covered by water about 2700 m deep.

Of the major ocean basins, the Pacific is the largest (almost as large as all of the others combined), and is the deepest (Table 1.1.2).

Table \(\PageIndex{2}\) Area and depth of the major oceans

Watch the video below for some perspective on the size and depth of the oceans. 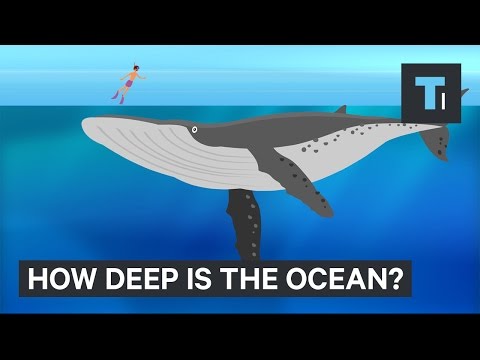 A YouTube element has been excluded from this version of the text. You can view it online here: https://rwu.pressbooks.pub/webboceanography/?p=24