The massive variety of vesuvianite is often called "Californite". This name has been given by the American mineralogist G.F. Kunz after his study about some samples coming from Happy Camp, Siskiyou County [1]. Californite coming from that area today is sometimes marketed as "Happy Camp Jade". Not being either jadeite nor nephrite the term "jade" in describing this material should be considered a misnomer and its use should not be encouraged. Being somehow similar to jade, this material is often referred to as being a "jade simulant". It's somehow a pity, since the high-grade material can be very beautiful by itself, and there is no need for any reference to other materials, even if similar. Massive vesuvianite is found also in different parts of California (e.g. Fresno County), and occasionally in some other part of the world (e.g. Russia and Switzerland).

Vesuvianite is typically found in areas that have been subjected to contact metamorphism events involving impure limestones, and its typically associated with grossular garnet. Californite from Happy Camp (and other localities) is no exception, and it's found also associated with white-ish massive grossular, serpentine, and other minerals (see many references in [2]). XRPD analysis showed that the translucent green parts of a californite sample from Happy Camp are pure vesuvianite, while the areas more opaque and lighter green in color have typically a few percent (~8% by weight in the sample analyzed) of chlorite associated (M. Voltolini 2011, pers. comm.). Massive vesuvianite is relatively easy to work, especially the high-grade material of pure vesuvianite, and can provide beautiful cabochons or other lapidary items. It's often green with some yellow/brown highlights, but other colors (e.g. white-ish, brown, etc.) are known to occur [2]. 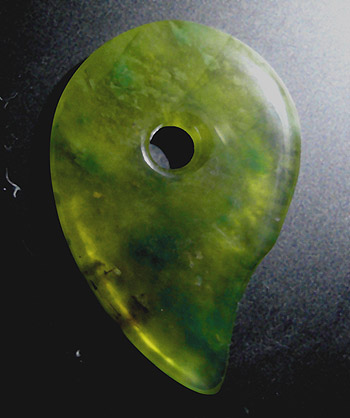 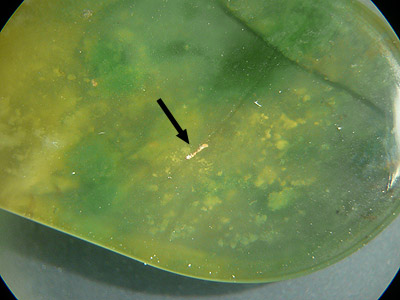 Figure \(\PageIndex{2}\): Photomicrography of a cabochon of californite from Happy Camp showing an inclusion of native gold (arrow) and the texture of the material. Tiny particles of gold are not infrequent in Happy Camp massive vesuvianite-bearing rocks. 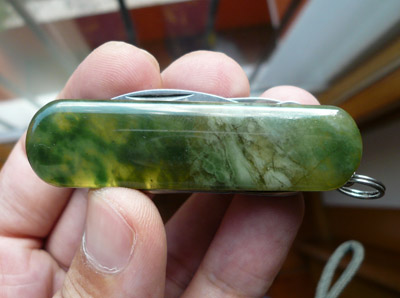 Figure \(\PageIndex{3}\): Californite used as a material for knife scales. The part lighter in color and more opaque (right side) is enriched in chlorite.