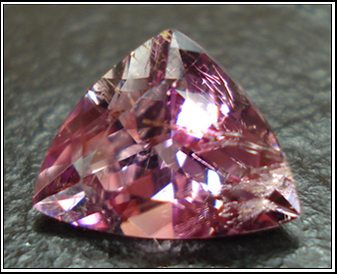 A very rare gem, first found in Mont St. Hilaire, Quebec, Canada. Named after the Poudrette family who were the operators of the quarry where it was first discovered.

Poudretteite could be mistaken for feldspar and scapolite.
Feldspar, however, has a biaxial optical nature and scapolite is uniaxial with a negative optic sign.

The birefringence varies from 0.016 to 0.021 and produces a noticeable doubling of facets.

No known diagnostic spectrum in the visible range.

Poudretteite is a very rare gem and no special vulnerabilities are reported, besides its brittleness.

Poudretteite was originally described in 1987 as minute crystals of no gemological interest at Mont St. Hilaire; the samples had been collected in the 1960’s. In 2000, rough was discovered in the Pain Pyit district, Mogok, Myanmar that cut a 3ct stone that was later determined to be poudretteite. As of 2004, 10 examples of poudretteite had been identified amoung Mogok stones, the largest being a 22ct crystal that was cut into a 9.4ct gem.

Facet grade poudretteite is also found in Mogok, Burma. As of mid-2007, about 30 small pieces of rough have been recovered. Most produce small gems, and clean stones weighing in excess of 1 carat remain elusive. Some gems are pink in tone, but these also are not common.