Color filters have many uses in gemology. The Chelsea Colour Filter™ (CF) is the most prominent of them.
While the CF is the most used, other filters can serve for a variety of applications. Among those are diffused colored plates used in conjunction with a microscope to inspect sapphires, narrow bandwidth filters to determine dispersion, and blue, red or yellow filters to examine fluorescence in gemstones.

Some people regard the CF as a primary tool, yet all modern gemology writers disagree with that statement. It can, however, give clues to the identity of a gemstone when used as an additional (secondary) tool. One can never rely on observations with any color filter alone.

Most color filters show their real power when inspecting parcels of gemstones. When one examines, for instance, a parcel of blue sapphires with a CF, some stones would stand out bright red from the rest of the lot. One should immediately be very suspicious of those appearing red when viewed through a CF, as this is not a typical observation for sapphire.
As these filters are highly portable, they are used on locations where one could not take larger gemological equipment. Gem/mineral shows and flea markets are some of those locations.
At best, the filters are there to alert suspicion. They tell you little about the identity of the gemstone. 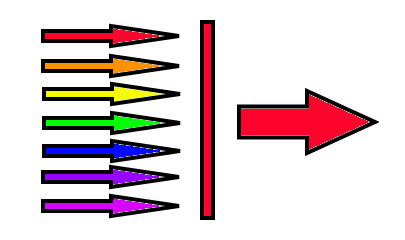 All color filters work on the same principle: they absorb certain wavelengths of light, letting only a portion of the visible part of the electromagnetic spectrum pass through.

In the image on the right, all colors of the visible range except red are absorbed (blocked) by a color filter, thus letting only red light pass through. This lets us control light, which can be very useful when inspecting gemstones.

Proper use of colored filters

When used as a stand-alone instrument (not with a refractometer or microscope), the filters should be held close to the eye as with a hand lens. A strong allochromatic light source should be used to get as much light into the stone as possible. As with the spectroscope, the stone is best observed in reflected light with the stone table down on a non-reflective background.
Do not use fluorescent lightning as these lights contain little to no red parts of the electromagnetic spectrum.

This filter was developed in the 1930's by Anderson and Payne in conjunction with the gemology class at Chelsea College in London, UK. The CF (as it is often abbreviated for "Chelsea Filter") lets only the red and yellow-green portions of white light pass through it.

However, it proved to be useful in other circumstances. With a few exceptions (such as rare natural cobalt colored spinel), hardly any gemstone is colored by cobalt but most synthetic spinels and blue glasses are.
These cobalt colored stones stand out bright red when viewed under the CF. Some natural blue sapphire may have traces of chromium, making them appear reddish as well.
Natural colored jadeite and dyed jadeite may also be separated by the same means.

Many gemstones have typical reactions to the CF and long lists are available in most standard gemological textbooks. The colors observed are usually red or green, various shades of those colors, or no reaction at all. Usually, the deeper the color of the stone, the more vivid the reaction.

The many exceptions to the rule make it a tool of "early warning".

These filters, also known as "Hanneman-Hodgkinson Synthetic Emerald Filters", are additional tools to the Chelsea Colour Filters.
When a gemstone is identified as emerald (natural or synthetic) by other means of identification, the stone is first examined through a CF. If the stone appears red, then the Emerald Filter is used. If the emerald then appears red through this filter as well, it is synthetic. The motto is "red red, drop dead!".

The Emerald Filter is shipped with a "support filter" and is used in cases when the emerald appears green through the CF.

The Ruby Filter, Aquamarine Filter, and Jade Filter, as well as some other filters, work on the same principle. These filters may be useful for your particular needs, but like the others, they are not primary tools. 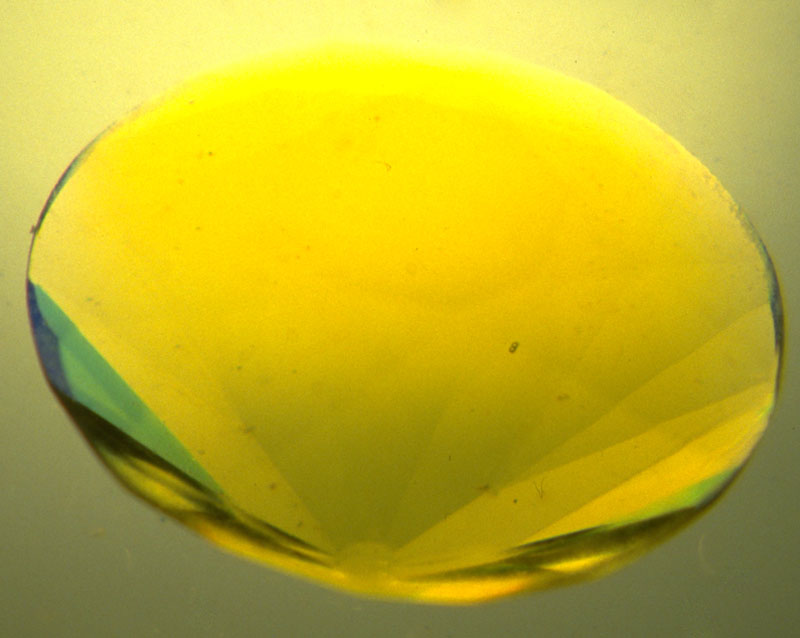 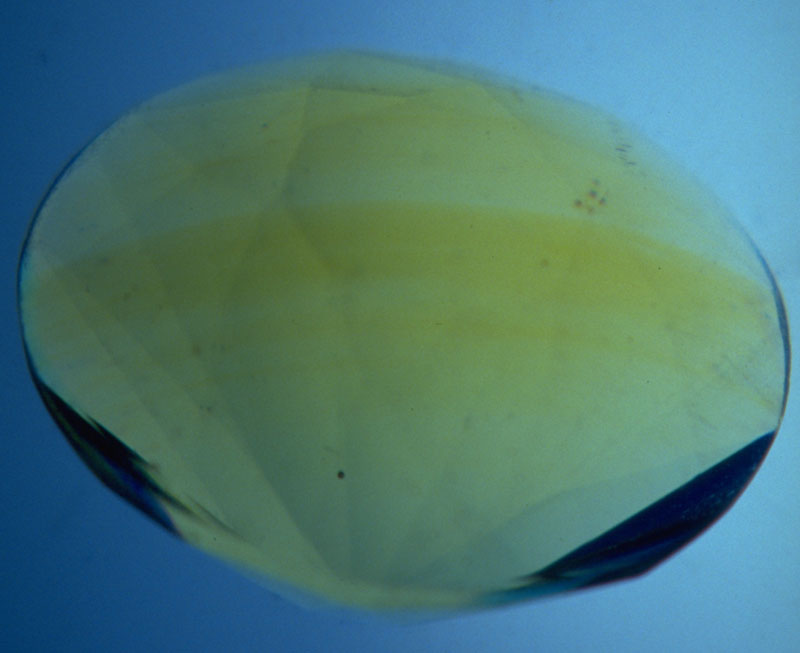 At left, a Verneuil synthetic yellow sapphire in di-iodomethane. At right, the same stone with a frosted blue filter below the immersion cell. The curved growth lines are now far easier to see.

Figure \(\PageIndex{3}\): Copper sulfate solution in a flask and a red filter

The "crossed filters" technique should not be confused with "crossed polars" or "crossed polaroids" as the latter two have to do with polarization, not luminescence.
A flask is filled with hydrous copper sulfate and white light is passed through the solution. The exiting light will be blue. During the illumination of the gemstone with this blue light, a red filter is placed between the eye of the observer and the stone. If the stone appears red when viewed through the red filter, this is clear proof that the stone is fluorescent in daylight.
The activator in the gem which causes this is the presence of chromium (Cr) in the crystal lattice and this effect is seen predominantly in ruby, alexandrite, emerald, red spinel, and pink topaz. It should be noted that iron (Fe) can greatly diminish or completely eliminate this fluorescence effect. As synthetic materials usually carry more Cr and little to no Fe, this glowing of red light is generally more intense than in their natural counterparts.

The hassle of carrying hydrous copper sulfate is luckily eliminated by the invention of blue LED pocket (or keychain) torches that may be purchased for just a few USD at the local hardware shop. One can use a sheet of red selenium glass as the red filter, or even a Chelsea Colour Filter. Other sheets, like plastics, could also serve as crossed filters.
A sheet of blue material in front of one's light source can mimic the copper sulfate solution and/or the LED torch.

Using the same light source in conjunction with a spectroscope, one can then easily distinguish between ruby and red spinel.