Earth’s Origin, and an Introduction to Topographic Maps Figure 1. The ESO 3.6-metre telescope at La Silla, during observations. Across the plan of the picture, is the Milky Way, our own galaxy, a disc-shaped structure seen perfectly edge-on. Above the telescope´s dome, here lighted by the Moon, and partially hidden behind dark dust clouds, is the yellowish and prominent central bulge of the Milky Way. The whole plan of the galaxy is populated by hundred thousand million of stars, as well as a conspicuous amount of interstellar gas and dusts. The dust absorbs the visible light and reemits it at longer wavelength, appearing totally opaque at our eyes. Located 600 km north of Santiago, at 2400 m altitude in the outskirts of the Chilean Atacama Desert, La Silla was first ESO site in Chile and the largest observatory of its time.

In the first module of the course, we will briefly introduce you to the field of geology (Chapter 1). It will also give you a sense of the diversity of topics we will be discussing in detail during the semester. Then, we will move on to the origin of Earth and the Solar System (Chapter 22). This information is important for understanding the key processes and forces at work on both our planet and throughout the universe.

In addition to learning about the formation of our planet, you will also be introduced to topographic maps and their use in visualizing Earth’s surface. A topographic map is an extremely useful type of map that adds a third dimension (vertical) to an otherwise two- dimensional map defined by the north, south, east, and west compass directions. This third dimension on a topographic map is represented by contour lines, which are imaginary lines drawn on a map that represent an elevation above sea level. A map with such elevation lines will provide the map reader with detailed information regarding the shape of the Earth’s surface.

Knowledge of how to interpret a topographic map will allow a person to locate and identify features on the Earth’s surface such as hills, valleys, depressions, steep cliffs and gentle slopes. In addition, the map reader will be able to identify areas that may be prone to geologic hazards such as landslides and flooding. Any person interested in purchasing property, landscaping, planning a hike or camping trip, or who needs to survey an area for construction of a road, dam, or building will want to first consult a topographic map.

Select images throughout this course to see them larger. 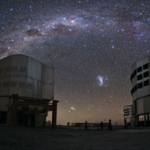 Figure 2. Sitting atop Cerro Paranal high above the Atacama Desert in Chile, two of the Very Large Telescope’s Unit Telescopes quietly bask in the starlight, observing the Milky Way as it arches over ESO’s Paranal Observatory. Several interesting objects can be seen in this picture. Some of the most prominent are the two Magellanic Clouds — one Small (SMC), one Large (LMC) — which appear brightly in between the two telescopes. By contrast, the dark Coalsack Nebula can be seen as an obscuring smudge across the Milky Way, resembling a giant cosmic thumbprint above the telescope on the left. The Magellanic Clouds are both located within the Local Group of galaxies that includes our galaxy, the Milky Way. For this week’s discussion topic, “Introductions” you should earn at least 30 points toward your required 150 points of class participation.

After you complete the reading, you can start working on Module 1 Assignment – Topographic Maps.

Module 1 Quiz has 10 multiple-choice questions and is based on the content of the Module 1 readings and Assignment 1.